Book One, Girl On A Tombstone, The Traveling Troupe Academy of Dr. Dark

AVAILABLE NOW on Amazon or read for free with Kindle Unlimited.

Traveling by rail, under the guise of a sideshow, Dr. Dark, a powerful alchemist, leads his Academy of young, magical misfits, through a brutal, post-apocalyptic landscape. Together, they desperately seek the clues that will save a steaming and dying earth.

Welcome to The Traveling Troupe Academy of Dr. Dark, where we deal in curiosities, the strange, the unusual, the unknown, and most importantly…magic.

ARRIVED….
November, in the not-too-distant future…

If I had known that today, on my birthday, that I would be bleeding out on a concrete slab in the long-abandoned Georgetown Morgue, I wouldn’t have climbed out of bed this morning. Much less performed in our show.

Today, I’m 18. And believe me, this is not the way I thought my day would go.
But then really? When had my life ever gone as planned?

My name is Skye St John, and bleeding to death in a rotting, stinking morgue was so not the way I planned to spend my birthday.
But I was still alive.
Guess that was a present of sorts.

And I’d kept my promise to the Troupe, to Dr. Dark and his Traveling Academy, by not revealing my unpredictable, destructive, Chaos Magic. I had not left a magical trail for those who attacked me, one that could have been followed and used to hunt the Troupe down.
Plus, I had rubbed the traces of the magically exposed Ley line clean with the soles of my platform boots. No reason leaving a clue that big hanging around.

Guess I did something right after all.

Still, I was dying here, and all I could think about was my kid sister, Emma. The one who was taken from me years ago. Was she alive? Or were my visions real? The ones that showed her image etched deep into the granite of a tombstone.
After tonight, I may never know. And didn’t that just break my heart.

Plus, as I felt the rhythm of my fading pulse tapping in my veins, I couldn’t help but think how much I had left undone.

First, I hadn’t made my move on a certain guy. Lame, I know, thinking about tangled sheets and midnight sex at a time like this. But in my defense, he was ‘the’ guy. And my heart had known that truth for years.
And now I had to wonder. What had I been waiting for?

But most importantly, I hadn’t saved our steaming, crumbling, dying world.
Yeah, I know. That last one? Kind of a biggie.
And if I couldn’t save the world? How could I save Emma?

A glimmer of light caught my eye and I turned. I bit my lip, trying hard not to scream from the pain. The faint light snaked along the dark, dank floors toward me. Was it magic traveling in the steam? Or was it something darker? Like black magic that was conjured, manufactured…evil.

I heard the crunch of footsteps on broken glass. I smelled something…off. Something…wrong.
Something bad.

Was this really the end of my life?
The end of the life and times of Skye St John?
And if it was, just damn it. I shouldn’t have slept through survival class. Who knew a nap could kill you?
I blinked back hot tears.
Guess I wasn’t going to make it to graduation.

Available for pre-order on Amazon. 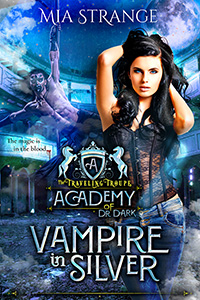 My name is Skye St John, and life in The Traveling Troupe Academy of Dr. Dark just got more complicated… as if that is even possible.
Due to a knife wound laden with a whole load of bad magic, my only chance to keep breathing, keep living, was to accept a blood transfusion from our spooky, mysterious Troupe member, Traveler Hale.

And now? I’m blood bound to a vampire. Not really the career choice I was going for.

When Traveler Hale takes the stage to swing on a silver pole, I’m not really worried. The man is wearing gloves after all. But when the crowd demands more, and the lethal, pure silver hooks are brought out- well that part? Worries me. A lot.
When the lethal silver pierces his skin, it may very well kill him. And if his number is up? With our blood connection, so is mine. And this time? Not even Dr. Dark’s powerful alchemy can save me.

So it’s up to me to save us both. Trouble is, with my unpredictable Chaos Magic, I may kill more people, including us, than I may save.

With a Mermaid to rescue, and the evil Archmage to kill, and my Chaos Magic out of control, I just can’t catch a break.

This is a continuing Academy, Urban Fantasy Series. Written under the pen name of Mia Strange, The Traveling Troupe Academy of Dr. Dark is set in a gritty, dangerous post-apocalyptic world, where magic and monsters abound.

Hop aboard, ride the rails, and help save the world. Dr. Dark, Skye St John, and the entire Traveling Troupe Academy, need all the help they can get.